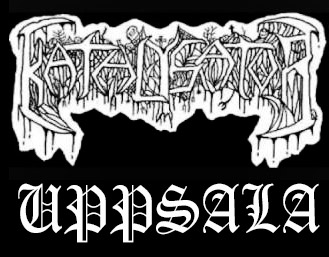 True story. And one of my best memories ever:)) The very first KATALYSATOR (later to be INVIDIOUS) gig in Uppsala. These guys opened the festival and played on the small stage upstairs. They were really young, and i mean REALLY – the singer, these days known as Hornper (IN SOLITUDE, INVIDIOUS), hadn´t even celebrated his 14th birthday yet. His brother, Gottfrid, was 15 (barely) and the rest of the band were about the same age (?). When the band entered the stage, the crowd (except the ones who actually knew what to expect) were having fun at their expence – at first. The festival used to have some young band as opening act, and the year before there were some 15-17 year olds wearing funny wigs & who were mostly in it for the laughs. Well, that wasn´t the case with KATALYSATOR. You got this 13 year old telling you that “We are KATALYSATOR and we play old school death metal”. Yeah, right.
But I think about two seconds later the giggling stopped and nobody has been taking lightly anything the Åhman brothers or any of the other guys in the band has been up to ever since. Quite the opposite.
The gig was awesome, the band pure power and the only thing that still got the crowd smiling a bit was Pelle shifted from brutal growling to some small talk between the songs:) But hey! The guy was 13!! And he was still awesome:)
Anyway, wasn´t that good friends with digital cameras yet and had to use the built-in flash, so the pics suck big time and they´re not that many, but I think they´re still very important.

»THE GALLERY
IN SOLITUDE, february 2012