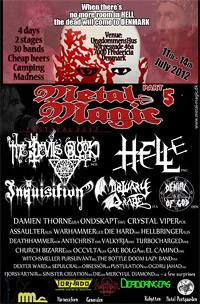 Dear diary…
I went on a roadtrip with the guys in VALKYRJA/ONDSKAPT.  Both bands were playing at the Metal Magic Festival in Denmark and we actually drove Sthlm – Fredericia in only 8 hours or so! Thanks to Vlad &  Jocke who were excellent drivers and also didn´t allowe any unnecessary stops on the way. I think everybody had to pee in the beercans or something?;)) Even feeding the troops was on the effective side. We just grabbed something from a burgerjoint at the roadside, ran back to the van (motor probably running…) and hit the road. After a couple of looong and expensive bridges (the first one we know about, the second one was a bit of a surprise…pricey one), we made it just in time for to see our friends in DIE HARD!! Thanks to the great staff at MM5, we got our passes, bands @ drink tickets in no time. They even got us an accomodation closer to the venue (5 min walk instead of…dunno…30?) and promised to drive the van there if the guys get too drunk:)) 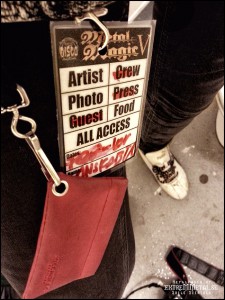 When all that was sorted out, we galloped off to the gig. We only missed the first 10 minutes or so. I also saw my third HELL gig since May later that evening.  They were fantastic at the Sweden Rock Festival in daylight, but they really can create the most awesome atmosphere when it´s a bit dark. Some rain and shitcold is also to prefer:)
Some beer drinking and meeting up with friends in a mixed dressing room/camping area with some ppl from HELL and Evil-Lÿn (a nice bunch from Finland:)).

The next morning I made some new friends at the beer breakfast at the venue. Didn´t have that much to do, so I hooked up with Timmy & the other el Camino guys (they played before w arrived) and went for some sightseeing in Fredericia (which btw was a really nice town!). Later I also met up with Alexandra (Püssy A Go Go), my roommates Axel (Ondskapt) & Adrian (Angrepp,IXXI) for some food and beers on the 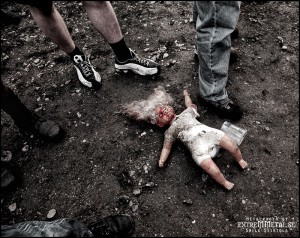 mainstreet. And lots of other nice people:)

I saw/shot most of the bands on saturday and tried to film some vids for my guys. ONDSKAPT, VALKYRJA and DEATHHAMMER played indoors (GREAT gigs all of them!!) and the rest of the bands on the outdoor stage. Really good performances by Turbocharged, Crystal Viper and Evil-Lÿn!! Wasn´t that warm outside and it rained a bit, but it was ok anyway:) The Devil´s Blood headlined on Saturday. F. lost her voice for some reason after a few songs and the band just continued making the rest of the set instrumental. And they still ruled!!:) 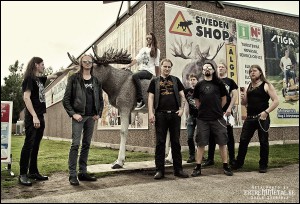 Metal Magic is a great small festival!! Very limited amount of tickets with camping just a few meters from the pub (you could actually sit inside a train!  The whole venue was an old train station. Really cool:)). I enjoyed it a lot and hope to go back.  For the full festival, not just a couple of days like this time. Still very happy I went there!
What else…? Yep! Bought a t-shirt:))
We drove back home almost as fast than we drove to Denmark. We took turns DJ:ing and I totally got the BEST playlist, but the Spotify controls in my phone were totally fucked up, so most of the songs were cut in half;) Note to self: if you ever need a DJ, NEVER book Vlad! He´s gruesome on stage, plays in amazing bands, but got this terrible taste in music!:p

Lots of thanks to my delightful companions who took care of me, and were really fun to travel with, all old & new friends I met and a BIG thanks and hugs to Martin Jørgensen & all the staff at the festival. People like you make this world to a better place:))

» MORE STUPIDASS PICS (some more might be uploaded later)
» THE LIVE GALLERIES from MM5
http://metal-magic.dk

A couple of my vids. Note Vlad starting at 0.27…
You will probably notice that videos are NOT my thing!!