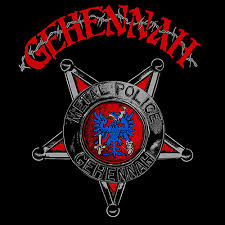 The street metal crazies Mr. Violence, Rob Stringburner, Charley Knuckleduster and Hellcop of GEHENNAH were in Stockholm to record the new album. I visited them in the studio and took some pics. Tobias from ENFORCER was there also and helped me to try out some blue lights I was planning to experiment with. We ran out of time so in the end we were in hurry to get the indoor pics done. They had found a couple of really cool locations close by for the outdoor shots and we also got more time for those. Awfully nice bunch of guys:)) The album will be released on Metal Blade Records later this year. Their nex gig will be at Party.san in Germany (Friday 7/8 13.30 on Mainstage!!)

Snapshots (Photo of me shooting: courtesy of Knuckleduster/GEHENNAH)