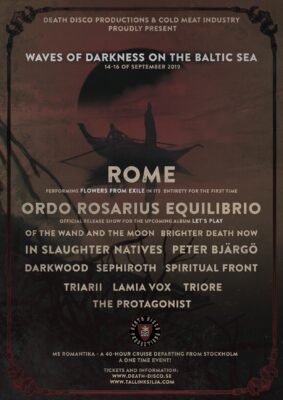 “The band originated in 1999 as a project fronted by Simone “Hellvis” Salvatori, a guitarist and singer from Italy. They have since worked extensively —both solo and with several other neofolk projects— on their musical output. The group has performed subsequent tours throughout Europe.
Spiritual Front’s so-called “Mafia-Folk” has been in release since 1999, in which time Simone Salvatori, the lyricist and conceptualist behind the band, has been known to create a unique feel within their traditionally folk style. Their most noticeable recurring output is Simone’s charismatic playing of the acoustic guitar, along with martial drum beats characteristic of the neofolk genre, art rock and new wave influences and heavily decadent musical styles.” ~ www.rustblade.com ~
[Live clip by Live Music]